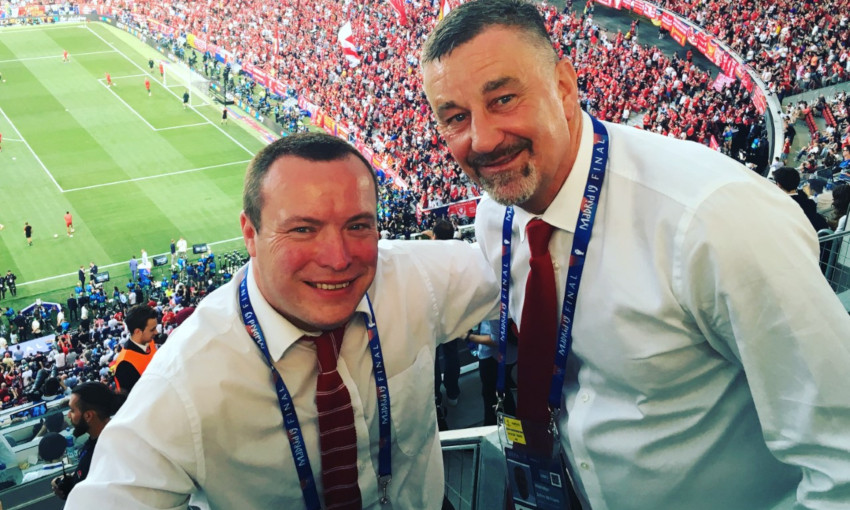 Behind the Badge: From full-back to mentor - Rob Jones' LFC story

There have been memes, T-shirts and millions of video views.

Four simple, yet captivating, words chosen by LFC commentator Steve Hunter captured the shock and emotion of one of the great moments in the club’s modern-day history.

For Steve, a lifelong Reds fan then in his 28th year on the mic, instinct takes over in his commentary position high up in the Sir Kenny Dalglish Stand。

“One of the best bits of advice I got was be yourself, and commentate as you see it,” he tells bpnmmdcx.com.

“Each commentator will have their own methods and there really is no right and wrong in it, I just prefer to commentate in the moment.

“It was just an incredible night, probably for me in terms of my job the second-best night commentating on Liverpool of all time, but Anfield is all about creating these moments.

“I do get a lot of people shouting that to me, especially when I was fortunate to travel on the US tour last summer, but it’s incredible, to be honest, and it’s hard to put into words. I just grin and get a bit emotional when they say that.

“Having commentated on Trent Alexander-Arnold for the Academy when he was just 15, to witness that moment was something else。 He is a fantastic lad and he deserves every moment of what he is achieving。

“It was just a special, special night and going on to win No.6 made it incredible.” 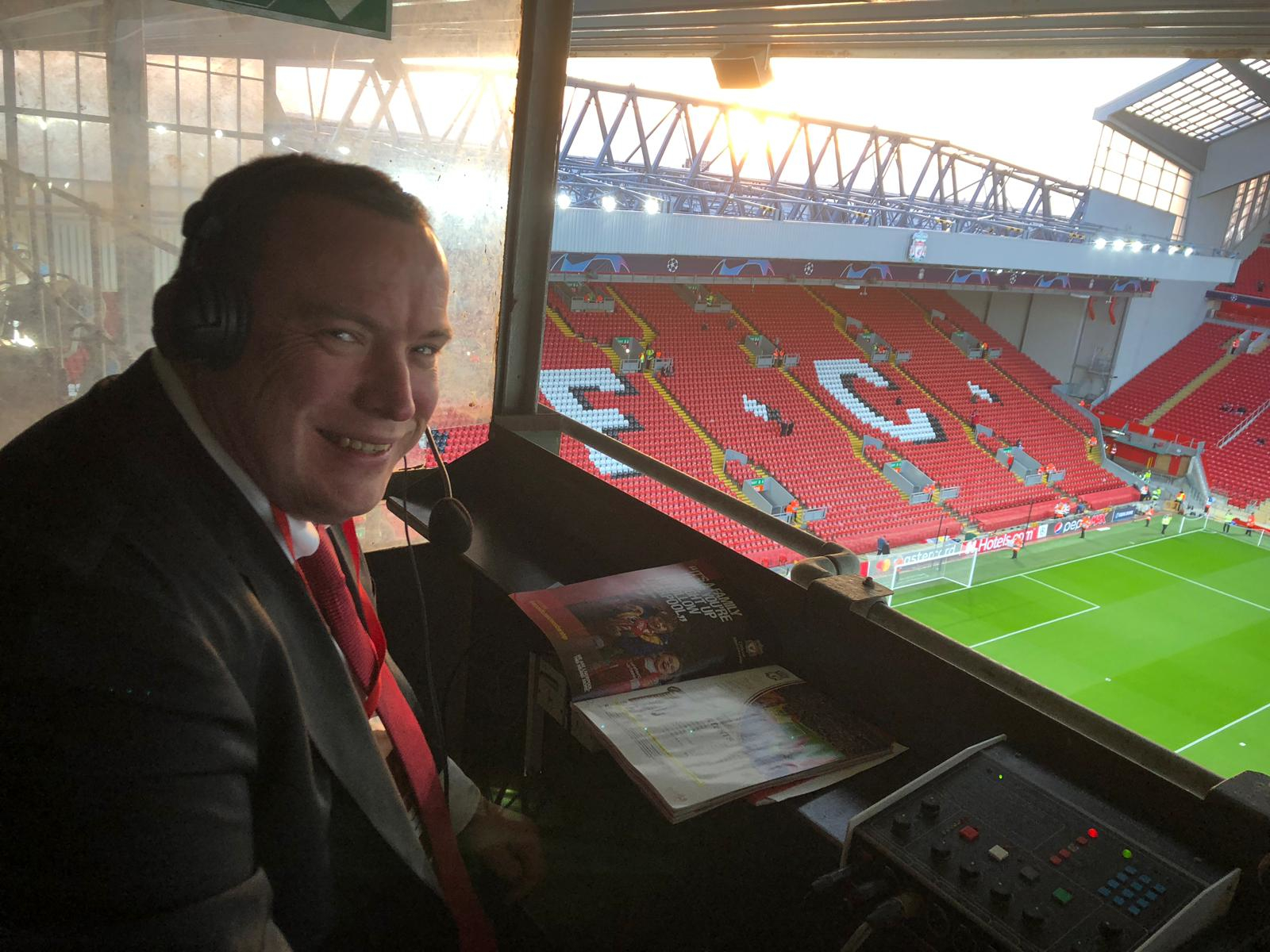 Steve in his commentary gantry at Anfield

北京赛车pk10投注His affiliation to the Reds was inherited from his mother and an already-fervent interest in the game was further piqued by the exploits of his uncle, Alf Jones, a professional footballer.

Jones played for Leeds United, Lincoln City and Wigan Athletic, coincidentally making his Leeds debut at Anfield on the opening day of the 1960-61 season against a Liverpool side featuring the likes of Roger Hunt and Ronnie Moran.

Steve’s first trip to the stadium that would later become his place of work arrived in September 1984。 “My mum saved up for years so she could take me to my first Liverpool game,” he recalls。

And not even a 2-0 defeat by Sheffield Wednesday could dampen his enthusiasm. “I was hooked. I then watched the Reds in the Anfield Road end, all the different colours which they had on the seats in the ‘80s, I was fascinated by it, the Kemlyn Road and stood on the Kop, too.

“‘Home’ eventually was the Paddock and I was very fortunate to have a season ticket right behind King Kenny’s dugout from 1987, right through to 1997. That was an incredible seat.”

Always running parallel to Steve’s passion for his team was a natural curiosity about commentary, one fostered by the pre-eminent voices of the era.

“From listening to David Coleman’s sensational commentary from the video of the 1974 FA Cup final and being a fan of Peter Jones, Alan Green, Barry Davies, John Motson, Brian Moore, and Clive Tyldesley, Graham Beecroft and Charlie Lambert on local radio, I just thought, ‘Wow, what a job that is!’”

His earliest forays into commentary were home productions – self-made recordings of matches played out on a Subbuteo table or video games – and revealed a talent that was encouraged by his family.

A significant step towards making the hobby a reality was steered by Steve’s grandfather, whose last-minute bid in a 1991 Children In Need auction secured an opportunity to commentate for real on a Tranmere Rovers fixture.

January 18 that year therefore represented the official start of his commentary career, broadcasting via Arrowe Park Hospital radio, on a day when Rovers defeated Bradford City 2-1.

Steve continued in the role at Arrowe Park for several years before diverting to the Wirral Globe newspaper, where he continued on the Tranmere beat – and first crossed paths with a future LFC co-commentator, John Aldridge – and was motoring correspondent.

As a new millennium neared and clubs established a digital presence, he chanced his arm with a letter to former Reds chief executive Peter Robinson that coincided with an intention to launch live commentary on this website。

And so February 13, 2000 marked Steve’s Liverpool debut, away at Arsenal.

北京赛车pk10投注“I was excited beyond belief,” he says. “It was an incredible experience and walking into the press box at Highbury working for LFC was the realisation of a dream.

“We won as well, 1-0 thanks to Titi Camara, in the green kit. I did a few more away games that season and then I was asked would I like to return to Merseyside and be the club’s official commentator. I mean, wow, that was amazing.

北京赛车pk10投注“My first full season as commentator was 2000-01 and the treble under Gerard Houllier! To witness some incredible players at their prime like Steven Gerrard, Carra, Robbie Fowler, Michael Owen, Gary Mac, Didi Hamann and Sami Hyypia in that first full season was incredible.

“It’s an enormous sense of pride and I feel privileged every single day, I really do and you have to pinch yourself sometimes. As a Hillsborough survivor I feel incredibly humble and honoured to work for this club and to have worked/work with some truly great people.

“From being a fan, I know what this football club means to people, everywhere from Liverpool to all over the world – and being part of it is something very special.”

Steve, who also writes for bpnmmdcx.com, commentates across all levels of the club, encompassing the first team, Women and Academy sides.

Anybody who has tuned into a broadcast he is part of will appreciate the depth of his knowledge and the sincerity of his passion for the club as a whole and the players as individuals – whichever team happens to be in action.

"No matter where any Liverpool fan around the world has watched this game, you can't beat moments like this." Pure… http://t.co/uiNTZs3sC5

“As a fan I think it’s incredibly important, and as an employee of the club it’s the same,” he explains.

“I am incredibly proud of the fact that I get the chance to commentate on the first team, the Academy and the Women, and genuinely love every second of it。”

Steve considers himself ‘extremely fortunate’ to have witnessed and voiced many of the most historic Liverpool occasions of the past two decades.

From the aforementioned treble campaign of 2000-01 – “I was commentating on Michael Owen’s FA Cup winner against Arsenal with Arsenal fans right in front of my press box position in Cardiff. To be fair, the Arsenal fans were sound even though I was going crazy!” – to unforgettable European nights against Chelsea in 2005, Borussia Dortmund in 2016 and, of course, the comeback against Barcelona and subsequent Champions League triumph in Madrid last season.

But, when pressed to pick his favourite, the experience of Istanbul 15 years ago tops them all.

While the drama that unfolded as Rafael Benitez’s Reds came from three goals down to defeat AC Milan and lift Old Big Ears perhaps cannot be matched, Steve had to overcome several hurdles himself to bring the action to his listeners that night.

“If I have to choose one game then it has got to be Istanbul 2005,” he says. “To come back like we did, with Stevie G and Carra playing like supermen and then the parade the day after – that was incredible.

“Because of phone line issues in the Ataturk Stadium press box I couldn’t use my ISDN commentary box, so I did the commentary on my work mobile phone – who knows what the bill must have been!

“I had no summariser and did the game on my own.

北京赛车pk10投注“I spent the entire night in the airport lounge waiting for our club staff plane and when we finally got back to Liverpool I was very fortunate to be on the players’ bus parade of the city, which was amazing。 I will never forget that。” 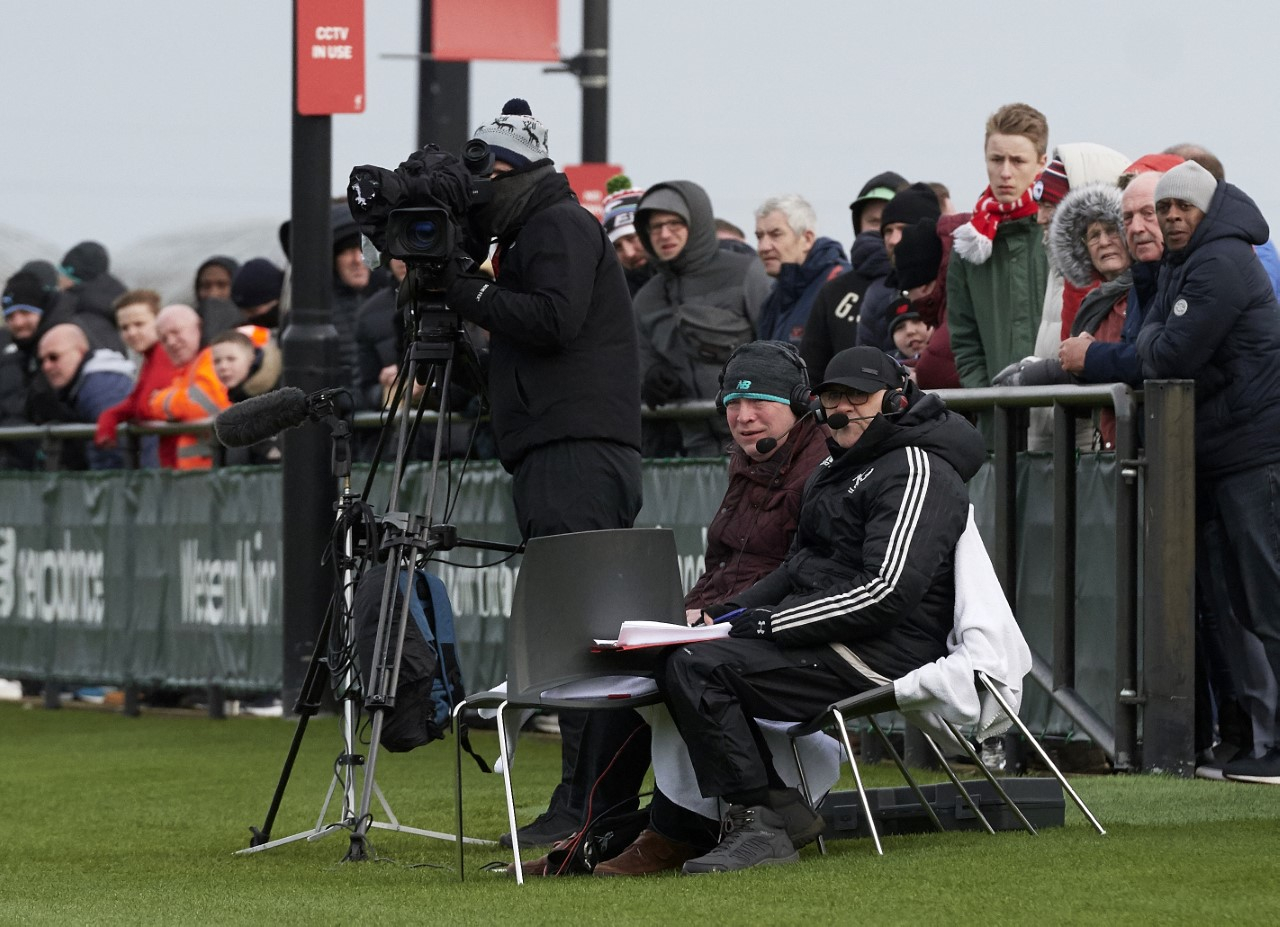 The life of a commentator goes beyond the 90 minutes, of course, with dedicated research ahead of each match a crucial aspect in a job that demands immediate accuracy。

It’s an element of Steve’s work he feels has benefited from modern technology.

“We have an incredible official club stats guy, Ged Rea, and his great friend Dave Ball as well, who are fantastic people. They are invaluable,” he explains.

“The guys at are amazing, too – their attention to detail for historical facts is brilliant。”

Best laid plans are just that, however, and there are unseen challenges for those tasked with communicating events in real time.

“Many commentators do a fair few games from the TV studios, so in that sense you are reliant on everything working almost perfect and it goes without saying, sometimes it doesn’t,” notes Steve.

“Feeds can go down, replays might be showing when a potential goal is going in at the other end, so that represents its challenges.

“With the introduction of VAR as well, you are reliant on your monitor for a second or third check. The monitor feed at Anfield went down once so we couldn’t see a replay… but if Aldo is adamant the opposition were offside then that’s good enough for me. No bias, of course!”

But one thing is for certain: Steve’s down-to-earth enthusiasm will be waiting to welcome the Reds back onto the pitch and supporters back to the airwaves.

“If fans like my style and it keeps them entertained then that means more to me than anything else,” he concludes. “I am just living my dream, trying to provide a good service for our fans worldwide and having lots of fun at the same time.”

More from our Behind the Badge series